Temporal sensorfusion for the classification of bioacoustic time series 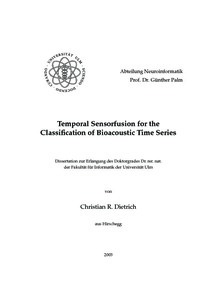 Classifying species by their sounds is a fundamental challenge in the study of animal vocalisations. Most of existing studies are based on manual inspection and labelling of acoustic features, e.g. amplitude signals and sound spectra, which rely on the agreement between human experts. But during the last ten years, systems for the automated classification of animal vocalisations have been developed. In this thesis a system for the classification of Orthoptera species by their sounds is described and the behaviour of this approach is demonstrated on a large data set containing sounds of 53 different species. The system consists of multiple classifiers, since in previous studies it has been shown that for many applications the classification performance of a single classifier system can be improved by combining the decisions of multiple classifiers. In particular, this thesis deals with classifier ensemble methods for time series classification applied to bioacoustic data. Hereby a set of local features is extracted inside a sliding time window which moves over the whole sound signal. The temporal combination of local features and the combination over the feature space are studied. Static combining paradigms where the classifier outputs are simply combined through a fixed fusion mapping, and adaptive combining paradigms where an additional fusion layer is trained through a second supervised learning procedure are proposed and discussed. The decision template (DT) fusion scheme is an intuitive approach for such a trainable fusion scheme, which is typically applied to recognize static objects. During the second supervised learning step the DT algorithm uses confusion matrix data to adapt the fusion layer. Many linear trainable decision fusion mappings, e.g. the combination with the linear associative memory, the pseudoinverse matrix and the naive Bayes fusion scheme are based on the same idea. Links between these methods are given. However, regarding the classification of temporal sequences these methods do not consider the temporal variation of the classifier outputs. In order to deal with variations of classifier decisions within time series we propose to calculate multiple decision templates (MDTs) per class. Two new methods called temporal decision templates (TDTs) and clustered decision templates (CDTs) are introduced and the behaviour of these new methods is discussed on real data from the field of bioacoustics and artificially generated data.