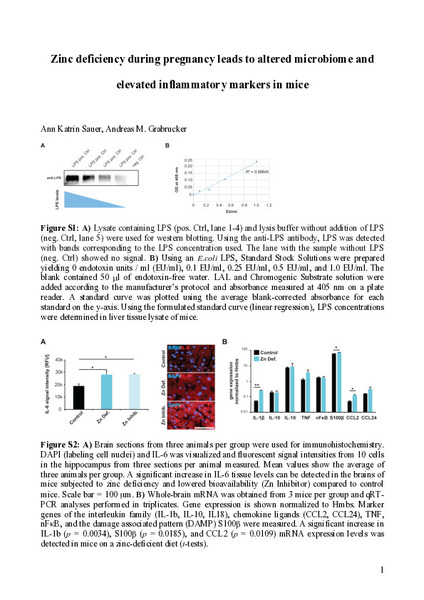 Zinc is an essential trace metal for bacteria of the intestinal flora. Approximately 20% of dietary zinc – intake is used by intestinal bacteria. The microbiome has recently been described as an important factor for healthy brain function via so-called gut-brain interactions. Similarly, zinc deficiency has been associated with neurological problems such as depression, mental lethargy and cognitive impairments in humans and animal models. However, the underlying pathomechanisms are currently not well understood and a link between zinc deficiency and altered microbiota composition has not been studied. Especially during pregnancy, women may be prone to low zinc status. Thus, here, we investigate whether zinc deficiency alters gut-brain interaction in pregnant mice by triggering changes in the microbiome. To that end, pregnant mice were fed different diets being zinc-adequate, deficient in zinc, or adequate in zinc but high in zinc uptake antagonists for 8 weeks. Our results show that acute zinc-deficient pregnant mice and pregnant mice on a diet high in zinc uptake antagonists have an altered composition of gastro-intestinal (GI) microbiota. These changes were accompanied by alterations in markers for GI permeability. Within the brain, we found signs of neuroinflammation. Interestingly, microbiota composition, gut pathology, and inflammatory cytokine levels were partially rescued upon supplementation of mice with zinc amino-acid conjugates (ZnAA). We conclude that zinc deficiency may contribute to abnormal gut-brain signaling by altering gut physiology, microbiota composition and triggering an increase of inflammatory markers.