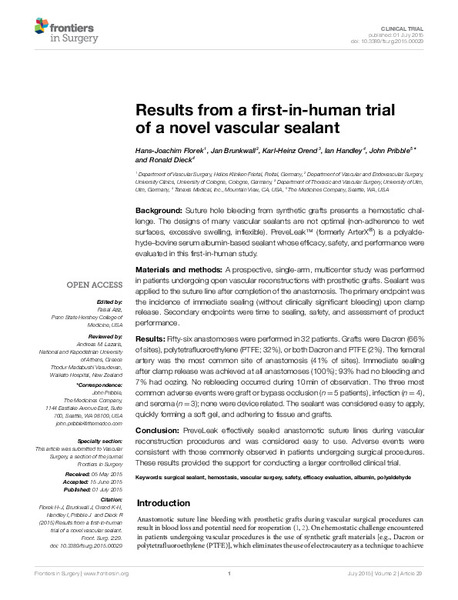 Background Suture hole bleeding from synthetic grafts presents a hemostatic challenge. The designs of many vascular sealants are not optimal (non-adherence to wet surfaces, excessive swelling, inflexible). PreveLeak™ (formerly ArterX®) is a polyaldehyde–bovine serum albumin-based sealant whose efficacy, safety, and performance were evaluated in this first-in-human study. Materials and methods A prospective, single-arm, multicenter study was performed in patients undergoing open vascular reconstructions with prosthetic grafts. Sealant was applied to the suture line after completion of the anastomosis. The primary endpoint was the incidence of immediate sealing (without clinically significant bleeding) upon clamp release. Secondary endpoints were time to sealing, safety, and assessment of product performance. Results Fifty-six anastomoses were performed in 32 patients. Grafts were Dacron (66% of sites), polytetrafluoroethylene (PTFE; 32%), or both Dacron and PTFE (2%). The femoral artery was the most common site of anastomosis (41% of sites). Immediate sealing after clamp release was achieved at all anastomoses (100%); 93% had no bleeding and 7% had oozing. No rebleeding occurred during 10 min of observation. The three most common adverse events were graft or bypass occlusion (n = 5 patients), infection (n = 4), and seroma (n = 3); none were device related. The sealant was considered easy to apply, quickly forming a soft gel, and adhering to tissue and grafts. Conclusion PreveLeak effectively sealed anastomotic suture lines during vascular reconstruction procedures and was considered easy to use. Adverse events were consistent with those commonly observed in patients undergoing surgical procedures. These results provided the support for conducting a larger controlled clinical trial.