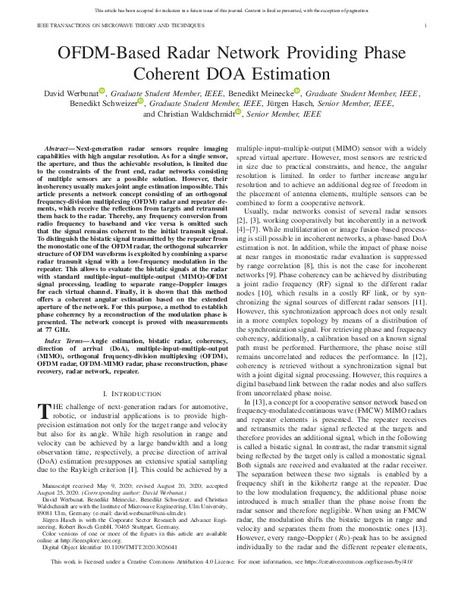 Next-generation radar sensors require imaging capabilities with high angular resolution. As for a single sensor, the aperture, and thus the achievable resolution, is limited due to the constraints of the front end, radar networks consisting of multiple sensors are a possible solution. However, their incoherency usually makes joint angle estimation impossible. This article presents a network concept consisting of an orthogonal frequency-division multiplexing (OFDM) radar and repeater elements, which receive the reflections from targets and retransmit them back to the radar. Thereby, any frequency conversion from radio frequency to baseband and vice versa is omitted such that the signal remains coherent to the initial transmit signal. To distinguish the bistatic signal transmitted by the repeater from the monostatic one of the OFDM radar, the orthogonal subcarrier structure of OFDM waveforms is exploited by combining a sparse radar transmit signal with a low-frequency modulation in the repeater. This allows to evaluate the bistatic signals at the radar with standard multiple-input-multiple-output (MIMO)-OFDM signal processing, leading to separate range-Doppler images for each virtual channel. Finally, it is shown that this method offers a coherent angular estimation based on the extended aperture of the network. For this purpose, a method to establish phase coherency by a reconstruction of the modulation phase is presented. The network concept is proved with measurements at 77 GHz.