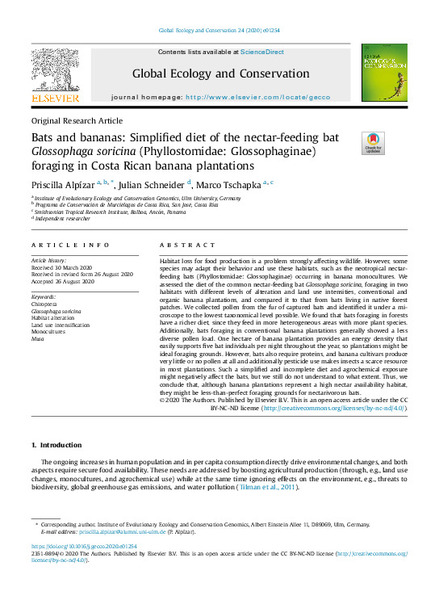 Habitat loss for food production is a problem strongly affecting wildlife. However, some species may adapt their behavior and use these habitats, such as the neotropical nectar-feeding bats (Phyllostomidae: Glossophaginae) occurring in banana monocultures. We assessed the diet of the common nectar-feeding bat Glossophaga soricina, foraging in two habitats with different levels of alteration and land use intensities, conventional and organic banana plantations, and compared it to that from bats living in native forest patches. We collected pollen from the fur of captured bats and identified it under a microscope to the lowest taxonomical level possible. We found that bats foraging in forests have a richer diet, since they feed in more heterogeneous areas with more plant species. Additionally, bats foraging in conventional banana plantations generally showed a less diverse pollen load. One hectare of banana plantation provides an energy density that easily supports five bat individuals per night throughout the year, so plantations might be ideal foraging grounds. However, bats also require proteins, and banana cultivars produce very little or no pollen at all and additionally pesticide use makes insects a scarce resource in most plantations. Such a simplified and incomplete diet and agrochemical exposure might negatively affect the bats, but we still do not understand to what extent. Thus, we conclude that, although banana plantations represent a high nectar availability habitat, they might be less-than-perfect foraging grounds for nectarivorous bats.

Except where otherwise noted, this item's license is described as CC BY-NC-ND 4.0 International