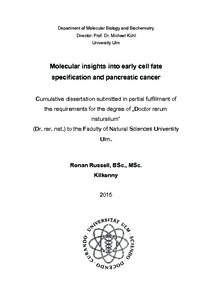 (1) In the first study, the role of the T-box factor Tbx3 in early cell lineage commitment of mouse ESCs was studied. We identified that TBX3 is dynamically expressed during the transition from pluripotency to the onset of specification of the mesendoderm lineages in differentiating embryonic stem cells (ESCs) in vitro and in developing mouse and Xenopus embryos in vivo. Moreover, we show that Tbx3 directly activates key lineage specification factors such as Sox17 and Eomes, while concomitantly enhancing paracrine Nodal/Smad2 signalling. Taken together, we show that Tbx3 acts as an upstream regulator of early mesendoderm lineage commitment. (2) In the second study, we utilized a refined protocol in order to generate iPSCs from an ectoderm derived cell source, namely, keratinocytes. Subsequently, we established highly efficient protocol for generating definitive endoderm from the newly derived iPSCs using a combination of growth factors and small chemical inhibitors. Finally we characterized the expression of small and intermediate conductance, calcium-activated potassium (SK) channels during the differentiation process. (3) The final study investigates the role of Ataxia telangiectasia-mutated (ATM) in pancreatic cancer formation and progression using a genetically engineered mouse model. Our data reveals that loss of ATM promotes early neoplastic lesion formation and subsequently a faster disease progression. The phenotype associated with ATM- targeted mice includes a strong fibrotic reaction in the pancreas, altered BMP4 signalling coupled with enhanced epithelial-to-mesenchymal transition (EMT). We find a strong correlation with between our mouse model and a cohort of human PDACs, whereby low levels of ATM are associated with more aggressive disease subtypes and reduced survival.