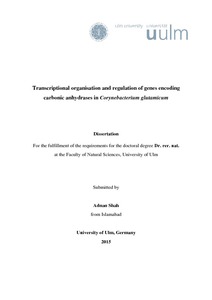 The intracellular carbon dioxide (CO2) and bicarbonate (HCO3-) balance is crucial in bacterial physiology, notably in carboxylation reactions which make use of HCO3- as substrate. Carbonic anhydrase (CA) (EC 4.2.1.1) catalyzes the reversible hydration of CO2 to HCO3- and maintains the balance of CO2/HCO3- in the intracellular environment. CA is therefore, likely to play an important role in carboxylation reactions of central metabolism especially those of the phosphoenolpyruvate (PEP)-pyruvate-oxaloacetate node in Corynebacterium glutamicum, an industrial workhorse for the production of amino acids as well as a model organism for closely related pathogens such as Mycobacterium tuberculosis. In C. glutamicum, two genes namely the bca gene coding for a beta-type CA and the gca gene coding for gamma-type CA have already been identified. The present work has focused on the transcriptional organisation as well as regulation of expression of these genes in relation to carbon sources and transcriptional regulators. The transcriptional start points (TSPs) were determined for both the bca and gca genes. It was observed that the bca gene codes for a leader-less transcript and its TSP was found to be an "A", which is the first nucleotide of the putative translational start codon (ATG) of the bca gene. As the gca gene was already known to form an operon with an upstream gene cg0154, the TSP for the gca gene was determined to be an "A" nucleotide which was at -20 position relative to the putative translational start site of the cg0154 gene. Furthermore, a partially conserved -10 region was also found for both the bca and gca genes. It was determined that expression of both the genes (bca and gca) is subject to carbon source-dependent regulation with higher expression on glucose than on acetate, when used as sole source of carbon. It was also observed that expression of the bca was about 15 times higher than that of the gca gene. Furthermore, it was shown that the carbon source-dependent regulation of the bca gene was not affected by the initial pH of the minimal medium as 6.3 or 6.8. In addition, an antisense RNA (asRNA) already reported within the coding region of the bca gene, was also characterized in terms of its expression in C. glutamicum. It was found that the transcriptional regulator RamA negatively regulates the expression of the bca gene in C. glutamicum. Furthermore, it was also observed that expression of the bca gene is not affected in the absence of a functional gca protein in a gca deletion mutant of C. glutamicum.