Plasma turbulence in the dissipation range - theory and simulations 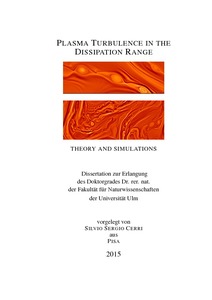 A frontier problem in plasma physics and among the hot topics in space plasma research, is the understanding of the kinetic processes at play in plasma turbulence. In astrophysical and space plasmas the energy is typically injected at large ``fluid" scales and then is non-linearly transferred towards smaller and smaller scales. This represents the so-called inertial range and the energy transfer process is known as turbulent cascade. Following such a cascade, the energy will eventually reach the microscopic (kinetic) length scales of the plasma, leading to the onset of kinetic regime. This range is usually referred to as the dissipation range, where both collisional and collisionless damping, as well as dispersive effects of plasma modes, heavily enter in the physical picture. The nature of plasma turbulence below the ion kinetic scales is the main topic of this thesis. A first approach to this problem is presented in the framework of gyrokinetic (GK) theory. In such framework, a study of freely-decaying electrostatic turbulence in 2D2V (two dimensions in physical space and two dimensions in velocity space) is presented. The effects of collisions are investigated in detail: new turbulent scalings, along with the corresponding energy spectra predictions, are derived analytically and numerical simulations with the GK turbulence code GENE are performed in support of the theoretical predictions. Finally, an hybrid Vlasov-Maxwell (HVM) model of the plasma is adopted, in which the ions are fully kinetic, whereas the electrons are treated as a neutralizing massless fluid. In this context, fully electromagnetic high-resolution 2D3V simulations of forced turbulence are performed for the first time ever. Different sets of parameters realistic for the solar wind plasma are considered. A wide range of complex phenomena is shown to emerge and the resulting turbulent dynamics and energy spectra are found to be in in good agreement with solar wind observations.