Integrated electromagnets and radiofrequency spectroscopy in a planar Paul trap 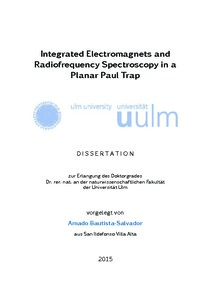 In modern ion quantum technology the fields of quantum information and microfabrication are being merged to build devices in which ions are confined near trap electrodes at the micrometer scale -with novel functionality where ion qubits enabling quantum devices. A long term goal in this field is to build a trapped-ion based quantum computer. Today’s quest, however, requires a progressive ion trap development in which materials selection, trap’s design and fabrication methods play a fundamental role. Here, we report on two fabrication methods for planar traps. We present the characterization of a planar trap with integrated electromagnets which is designed to coherently manipulate 40Ca+ ions’ internal states via magnetic field gradients and long-wavelength radiation. By implementing radiofrequency spectroscopy, in the presence of static magnetic fields, and by moving a single 40Ca+ ion about 600 µm along the trap axis we measured the total static magnetic field which yields a gradient of 1.11 +/- 0.18 T/m*A in this direction. We anticipate in this trap magnetic gradients of 10 T/m*A perpendicular to the trap axis. A second generation of this trap, a novel hybrid planar trap, is built by combining the capabilities of thick film technology and laser-induced glass micromachining to structure independent current-carrying wires beneath an ion trap. Into the vacuum chamber, we also incorporate surface cleaning tools such as ion-beam bombardment to diminish possible adsorbed contaminants which may reflect in excessive ion heating rates. Based on numerical simulations, we predict that the wires underneath the ion trap, although far from trap center, will be capable of producing high magnetic field gradients of about 3 T/m*A. Already such robust fields will allow to investigate strong v_ss=30 kHz spin-spin interactions in 40Ca+ ion crystals in planar traps.