Assessment of structural properties of amyloid aggregates and their application potential 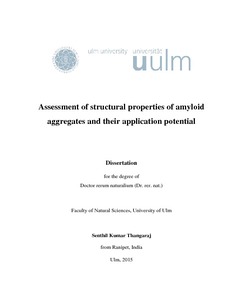 Amyloid fibrils and oligomers are involved in the pathogenesis of several major human diseases such as Alzheimer’s and Parkinson’s. Yet, amyloid fibrils are proved to possess normal biological functions, which prompted to discover the wide range of applications for these filaments. This thesis focused on understanding the structural properties of amyloid aggregates and to develop potential applications. First, two protein-based amyloid binders, B10AP and 4.G11 were characterized extensively. An in-depth analysis of B10AP conformational binding mechanism to amyloid fibrils demonstrated that only some amyloid fibrils possessed B10AP interaction. Further analysis revealed that B10AP recognized amyloid fibril surfaces carrying regularly distributed anionic charges. Studies with 4.G11 showed that it bound exclusively to Abeta(40/42) fibrils but not to their disaggregated monomeric peptides or other amyloid fibrils. 4.G11 influences the aggregation of Abeta(1-40) by altering its fibrillation kinetics. Addition of 4.G11 to preformed Abeta fibrils generated short fragmented fibrils. Next, for the applicative part of this thesis, we studied functional aspect of sodium caseinate fibril formation and the structural utility of amyloid oligomers. NaCas fibrils were produced from NaCas crude extract after seeding with Abeta(1-40) fibrils. Formed fibrils were successfully incorporated into protein films and they influence the material properties of the films. Finally the investigations of oligomer species revealed amyloid oligomers as a new class of proteinaceous and biocompatible nanoparticles. Abeta(1-40) oligomers possess compact, quasi-crystalline architecture with nanoscale regularities. Amyloid oligomers bear ability to act as carriers for small molecules and have range of applications from medical imaging to nanotechnology.