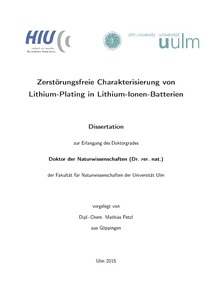 The dissertation is focused on the nondestructive detection and quantification of lithium plating in commercial lithium-ion batteries. Lithium plating denotes the deposition of metallic lithium on the negative graphite electrode of a lithium-ion battery during charging. This is a severe degradation process followed by capacity loss and impedance rise. Furthermore, the deposited lithium can grow dendritically which poses a serious safety hazard. It is shown that lithium plating can be detected by a new voltage plateau during the discharge step after charging the cell at low temperatures with high currents. Differential analysis of this plateau enables an estimation of the amount of plated lithium. Subsequent cell opening shows that the metallic lithium is deposited in a uniform and flat manner. The negative electrode is completely covered by the metallic lithium layer. Moreover, aging tests are performed at plating conditions, i.e. low temperatures and high charge currents. The capacity retention curves exhibit an inflection point which shows that lithium plating counteracts itself during long-term cycling. This is due to a loss of active lithium by irreversible plating and surface film formation. Thus, the capacity balance of the electrodes is shifted in a way that lithium plating is decreased.