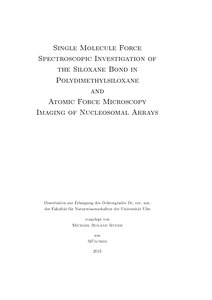 The goal of this thesis was to support the development and improvement of Polydimethylsiloxane (PDMS) by researching a method that is able to quantitatively characterize the siloxane bond, which is the backbone of PDMS polymers, and its rupture behavior. Single molecule force spectroscopic constant force measurements of covalently attached PDMS polymers were performed. Two different rupture populations were observed in the experiment and it was found that the rupture behavior was independent of the polymer length, which means that only ruptures at or near the attachment points were measured. Three different bond rupture models were used to describe the rupture behavior of the bond: the Bell model, the CUSP model and the linear-cubic model. It was possible to estimate bond potential parameters with good quality for the Bell model. For the other tow models it was only possible to determine one of three parameters with sufficient quality. Constant speed data from a previous work was also analyzed with the same methods. None of the bond rupture models described the constant speed data well. Using simulations it could be shown that the rupture populations from the constant force measurements and the rupture population from the constant speed measurements are different from each other and that there exist at least three different rupture populations in the same sample. The 30 nm fiber is the presumed second level of condensation in chromatin after the beads-on-a-string conformation. Nucleosomal arrays are a good basis to systematically research the 30 nm fiber as they are a defined and controllable system. In this thesis nucleosomal arrays were imaged using the atomic force microscope. They were imaged using contact mode in air and tapping mode in liquid. The preparation of samples, concentrations of nucleosomal arrays, salts and buffers were primarily optimized for good imaging results. The influence of ions on the conformation of the arrays was also examined.