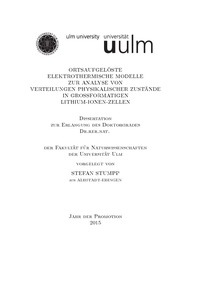 The present work aimed to develop non-destructive methods of characterization in combination with spatial modeling of a large-sized lithium-ion pouch cell for the investigation of non-measurable physical states. Subsequently the developed methodology was applied to analyze various influences on the distribution of physical states and to identify inhomogeneities and underlying causes. The influence of contact resistance at the contact tabs was investigated using a thermal imaging camera. A high contact resistance causes a local hotspot which covers the thermal response of the cell and complicates the interpretation of the temperature distribution to characterize cell properties. The electro-thermal interaction was studied under various electrical current loads and thermal boundary conditions. Electrical and thermal loads were chosen to suppress or specifically induce the influence of effects. A periodic current profile of symmetric discharge-charge-pulses was used to avoid a significant change of state-of-charge and to suppress the influence of reversible heat production. In this way the observed temperature distribution, which showed a dynamic behavior accompanied by a shift of the position of maximum temperature, could be explained through the interpretation of simulation data. The relevant temperature range can be reduced through a cooling system which ensures a constant surface temperature of the cell. The cell simulation showed, that the temperature could be stabilized with small inhomogeneity by a cooling system tailored to the inhomogeneous distribution of internal heat production. In this way the cause for small inhomogeneities in state-of-charge even for constant current loads could be assigned to opposed dependencies of electrical cell properties. Finally the calculated three-dimensional current density inside the stack of electrodes revealed higher currents through the outer layers of the stack, resulting in a design related elevated risk of degradation.