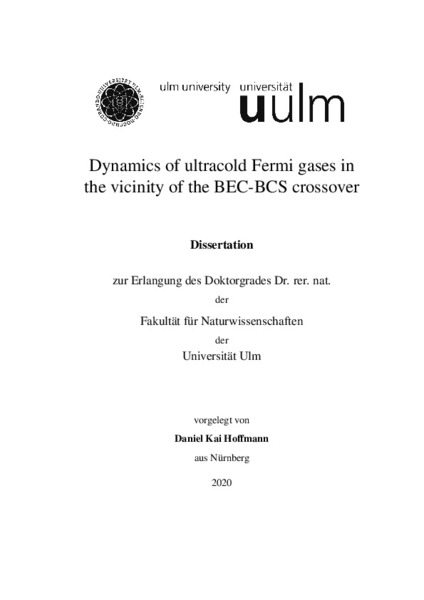 Dynamics play an important role in physics. From classical mechanics, astrophysics, hydrodynamics to quantum physics, the dynamics of physical systems have crucial impact on our understanding of nature. For simple configurations such as in the two-body problem the dynamics can be calculated analytically. However, things get more complicated once the number of contributors in a system increases such as in few- or many-body systems. One way to study such an ensemble is to use a model system where decisive parameters can be controlled. In this thesis I make use of an ultracold cloud of fermionic Lithium-6 atoms close to zero temperature to study dynamics of few- and many-body systems. Two experimental studies to this topic are presented. In the first study, I produced a gas of di-atomic molecules (dimers), consisting of two Lithium-6 atoms in different states, to study the reaction kinetics of the four-body process of a dimer-dimer collision. At temperatures close to absolute zero the internal and external degrees of freedom of the dimers can be well controlled. This allowed us to investigate the kinetics of a single-channel reaction. To resolve the dynamics of the process we heated a gas of molecules and tracked the state of the system as a function of time. We determined the reaction-rate constant of the process for various thermal energies which allowed us to verify the Arrhenius law for molecule-molecule reactions in the ultracold regime. Additionally, we provided first insight into the dependence of this four-body process on the particle interaction. In the second experimental work, I focused on the thermodynamical properties of the ultracold gas. Cooling the gas of Lithium-6 atoms close to zero temperature the gas undergoes a phase transition and superfluidity is established. To study the dynamics in such a gas, we used a local perturbation to produce sound waves. Depending on the excitation scheme we either excited first sound, i.e. a pressure wave, known from classical mechanics, or second sound, i.e. an entropy wave. In the study we focused on second sound and determined the second sound speed as a function of the particle interaction. We found agreement of our results with both - a numerical and an analytical description of the interaction strength dependence of the second sound speed. Besides the experimental work, a theoretical proposal for a novel imaging technique for a 2D ultracold gas in an optical lattice is presented. The scheme is based on a holographic approach and enables the detection of individual particles with only a few hundred scattered photons per atom.