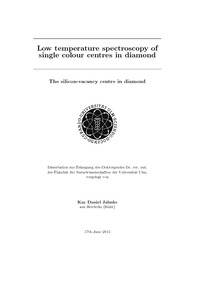 The properties of the negatively charged silicon-vacancy (SiV) centre in diamond were investigated in this thesis. Polarisation measurements revealed transition dipoles and the symmetry groups of the centre. In a diamond grown by chemical vapour deposition, a high spectral overlap of SiV centres with nearly transform limited optical line widths was found pointing to a low sensitivity of SiV centres to both strain and local electric fields. This low inhomogeneous distribution allowed for a quantum interference leading to a contrast of over 70 % in a Hong-Ou-Mandel experiment. Additionally, an isotopic shift at single site level could be confirmed and than used to identify the 64meV peak in the phonon sideband as a local vibrational mode. A low temperature investigation of optical line width and orbital relaxation time indicated a direct single-phonon process between the orbital states while at higher temperatures a two-phonon dephasing was found to be the main electron-phonon process. The results were consistently described by the microscopic model developed and additional strength was added by consistent studies of spin-orbit splitting and optical lifetime. By applying a magnetic field the spin degeneracy in the ground state was lifted allowing for spin initialisation with over 95 % fidelity with a spin relaxation time of over 2 milliseconds. Two resonant lasers were used to demonstrate coherent population trapping leading to a coherence time in the order of the orbital relaxation time. The coherence was concluded to be limited by orbital dephasing processes and we propose techniques to overcome them. One of them is to use nanodiamonds with a size smaller than half the phonon wavelength to suppress the dephasing process. Investigating the spectral properties at cryogenic temperatures, nearly lifetime limited line widths have been found, making these nanodiamonds good candidates for further spin applications with SiV centres.

Except where otherwise noted, this item's license is described as CC BY-SA 3.0 Deutschland