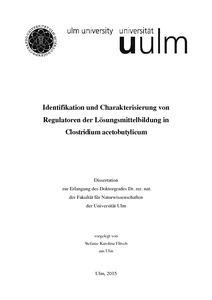 Clostridium acetobutylicum is an anaerobic Gram-positive, endospore-forming bacterium and is able to ferment a wide variety of sugars into the solvents acetone and butanol. In this study an analysis of the influence of the regulator proteins AdcS and AdcR on solvent formation was performed. The AdcR binding site was determined in the promoter region of the adcR/adcS operon as well as in the promoter region of the adc operon and the sol operon using footprint assays. A comparison of the AdcR binding site of the operons allowed the identification of a consensus sequence (ATATTTTCATATAAAT) in the promoter region of the adcR/adcS. In growth experiments with recombinant strains of C. acetobutylicum harbouring the genes adcS and adcR on plasmids in sense and antisense orientation, both proteins showed a distinct media dependency. In CG medium, AdcS seems to be an activator, whereas in MES medium it seems to be a repressor of the acetone and butanol production. AdcR seems to be a repressor of the acetone and butanol production in CG medium. In MES medium, AdcR seems to be an activator of the butanol production. In MES medium with glycerol, both proteins repressed the adhE2-dependent butanol production. The effect of the aldehyde ferredoxin oxidoreductase (Aor) on solvent formation was investigated. The aor overexpression and antisense RNA-based downregulation of aor led to a reduced production of acetone and butanol, whereas the aor deletion mutant produced no solvents and a complementation could not restore solvent production to wildtype level. In order to find differences in the transcription of operons, which are involved in solvent formation in the strain C. acetobutylicum delta aor, Northern blot analyses were performed. The analyses indicated a repressed transcription of the adc and the sol operon in the strain C. acetobutylicum delta aor in comparison to the wildtype stain. The transcription of the bdhB operon was not affected.