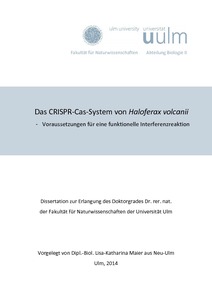 CRISPR-Cas is an adaptive, heritable and specific immune defence system of prokaryotes. Key component is the small crRNA allowing for the recognition and subsequent elimination of invading foreign nucleic acids via the Cas-protein effector complex Cascade. It is shown here that the Haloferax volcanii type I-B CRISPR-Cas system depends on the presence of one out of six protospacer adjacent motifs (PAMs) within the invaders genome. This high number of PAM sequences identified reveals a high flexibility in terms of invader recognition. Besides the presence of a PAM, invader recognition also depends on close to 100 % basepairing between the protospacer region and the spacer sequence of the crRNA within a non-contiguous 13 basepairs long seed-sequence. To explore and define further prerequisites for the interference reaction, a system for Cas6 independent generation of an icrRNA, perfectly mimicking a wildtype crRNA, has been established and characterized. With this it is shown that in the type I-B system of Haloferax the interference stage can be exerted in absence of the Cas6 protein. Therefrom it can be argued that Cas6 is not an integral part of the I-B Cascade complex. Using variants of icrRNA it could be inferred that major parts of the crRNA 3’-tag are not essential to the defence activity whereas the 5’-tag of the (i)crRNA is. Additionally a system for the expression of a shortened, synthetic CRISPR locus S has been generated, validated and exploited for the analysis of the repeat sequence showing that, although not important for the interference reaction, the 3’-tag to be is associated with crRNA biogenesis. This study also dealt with the overexpression of the protein Csc2 of Thermophilum pendens for a crystal structure and binding analysis. It could be demonstrated that it possesses RNA binding properties being more distinct in contact with the natural crRNA substrate compared to a nonspecific polyU-RNA and being linked to a tendency towards oligomerization.