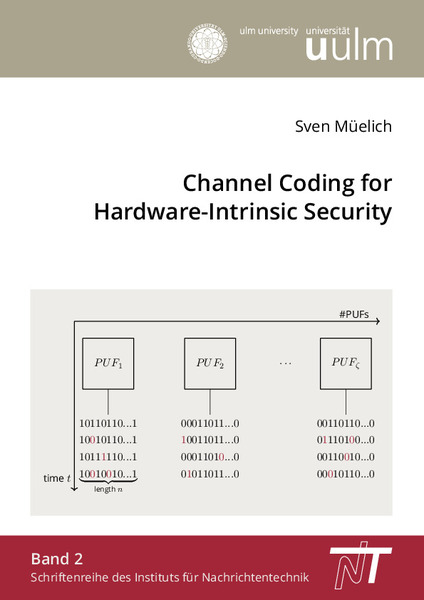 Hardware-intrinsic security studies cryptographic methods, whose implementations are assisted by some specific physical properties of the hardware on which they are executed. Physical Unclonable Functions (PUFs) are a predominant part of that field and currently an active research area. The most investigated type of PUF is the so-called silicon PUF, representing an electronic device, which is embedded in an integrated circuit (IC) with some cryptographic functions. PUFs are used to generate a highly secret, time-invariant, true random bit sequence, referred to as PUF response. This randomly generated PUF response is unique for each individual PUF device and can easily be reproduced on request inside the IC over its entire lifetime. The PUF response is derived from the inherent randomness of some physical properties occurring from variations in the IC manufacturing process. These variations cannot be controlled with todays technologies. For example, the propagation delay of logic gates or the initialization state of memory cells can be used in order to generate a PUF response. Since such behaviors cannot be controlled, it is extremely unlikely to produce two PUFs with the same response. This is the reason why PUFs are called unclonable. Even the IC manufacturer cannot predict the individual response of an embedded PUF without performing a readout after IC manufacturing. If the IC manufacturer prevents the possibility to readout a PUF response in any way, not even by using any kind of IC tampering, the PUF response becomes secret to everyone. Since PUFs can be interpreted as highly secret, true random bit sources, they are predestined for a variety of cryptographic applications such as, for example, secret key generation and storage, identification and authentication of various entities. A PUF response exists in its binary form only for a very short active time period during execution of the cryptographic function in which it is involved. Otherwise, in predominantly inactive periods, it is hidden in its analog form, consisting of unclonable analog physical parameter values of the PUF device. Every attempt to manipulate these parameter values uncontrollably changes the binary PUF response. Consequently, the PUF response is inseparably merged with the IC hardware and it is not possible to reconstruct its binary value during inactive periods. In the very short active periods, when the PUF response exists in its binary form, its secret can be protected by additional methods. Due to external influences like changes of temperature, supply voltage or IC aging, many PUF variants cannot reproduce their binary responses error-free. For such error-prone PUFs, methods from the field of error-correcting codes have to be applied to reliably reproduce binary PUF responses. In current applications, however, all PUF types are only equipped with classical error-correcting codes, which are not tailored to the specific properties of individual PUF types. Consequently, the possibilities of reliability improvements of error-prone PUFs are not completely exhausted. This dissertation considers several aspects of PUFs from the perspective of coding theory. Traditionally, for error correction in PUFs, a worst-case bit error probability is used in order to model the binary symmetric channel. As existing results in the literature indicate, this is a very conservative and sometimes even pessimistic assumption. In the theory of error-correcting codes, knowing characteristics of a channel is always beneficial in order to design codes that lead to an improvement of the error-correction performance. We derive channel models for two different PUF variants, namely Ring Oscillator PUFs (ROPUFs) and Dynamic Random Access Memory (DRAM) PUFs. Using DRAM to construct PUFs is a comparatively new approach proposed in the literature. In contrast to the established variants, PUF responses extracted from DRAM are heavily biased towards either ``0'' or ``1'', and hence, debiasing methods have to be applied in addition to error correction. We propose methods that can be applied to solve the debiasing problem. When dealing with noisy responses, secure sketches are a widely used concept. When reproducing a PUF response based on an erroneous re-extracted response, so-called helper data which are calculated and stored during initialization have to be used to map responses to codewords, such that decoding algorithms can be applied. We propose and analyze a new secure sketch that only uses an error-correcting code, but no further helper data. Also, we use our channel model, which we derived for ROPUFs, to construct new secure sketches. Furthermore, we propose specific code constructions that can be used for error correction in the context of PUFs. Block codes and convolutional codes are considered for that purpose and we explain how to improve existing results from literature by using code classes (Reed--Muller codes, Reed--Solomon codes), decoding techniques (generalized minimum-distance decoding, power decoding, list decoding, using soft information at the input of the decoder, sequential decoding) or coding techniques (generalized concatenated codes), that have not been applied to PUFs before. Our code constructions result in a smaller block error probability, decoding complexity or codeword length in comparison to existing implementations. The final part of this dissertation deals with security aspects. In particular, we consider timing attacks on the decoding algorithm, as a representative of the huge family of side-channel attacks. We study two techniques to prevent such attacks, namely a masking technique, as well as a modified decoding algorithm with a runtime that is constant and independent of the received word.