Towards a mathematical taxonomy of visual illusions? 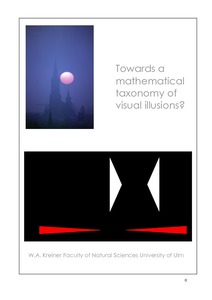 For several geometric visual illusions the apparent size of a certain context element appears to depend on a particular geometric parameter in quite a systematic way. The experimental values giving the magnitude of the illusions appear to follow smooth functions. From conceptual models algebraic functions are derived and fitted to the experimental data within their error limits. For some of the illusions the plot of data can be approximated by a fairly simple algebraic expression, eg, by an exponential decay, a power or even a linear function. In this context they are called basic functions. Other illusions seem to be the result of compound effects, involving two or more components, among them being interacting and opposing effects as well. Combinations of basic functions are employed to describe some of the well known illusions and some of their variants. They are expressed via a combination of basic functions.