Glycogen metabolism in Corynebacterium glutamicum: effects of environmental factors and of metabolic disturbances 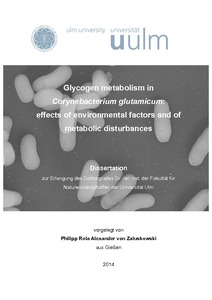 Corynebacterium glutamicum is able to accumulate and degrade glycogen during growth with different carbon sources. In this work, the role of the genes glgC, glgA, glgB, glgX, malP and glgP in the glycogen metabolism of C. glutamicum during growth on glucose and maltose was investigated. For growth on glucose, it was shown that glgC, glgA and glgB are responsible for glycogen synthesis, while glgX and malP are involved in glycogen degradation. For growth on maltose, it was shown that glgC and glgA are not involved in glycogen synthesis, glgB is involved in glycogen synthesis and maltose utilization, and malP and glgX are responsible for glycogen degradation. Furthermore, the influence of environmental factors such as phosphate, nitrogen and oxygen availability on glycogen metabolism was investigated. While decreased phosphate concentrations led to elevated glycogen levels, reduction of nitrogen availability showed no effect on glycogen levels. Semi-quantitative RT-PCR experiments confirmed that the higher glycogen levels due to phosphate reduction were caused at least partly by changes in the transcription levels of the involved genes. Additional experiments under anaerobic conditions showed that C. glutamicum is able to accumulate glycogen and that the accumulation of glycogen leads to an increase of OD600. Furthermore, it was observed that the abolishment of glycogen synthesis led to improved growth under slightly acidic extracellular pH of 6. Last, but not least, the effect of a disturbed glycogen metabolism on energetic parameters such as ATP, NADH/H+ or NADPH/H+ levels and on survival after prolonged carbon starvation was investigated. In these experiments it was shown that disturbances in the glycogen metabolism of C. glutamicum have no significant effect on energetic parameters, but affect the growth after re-inoculation after prolonged carbon starvation.