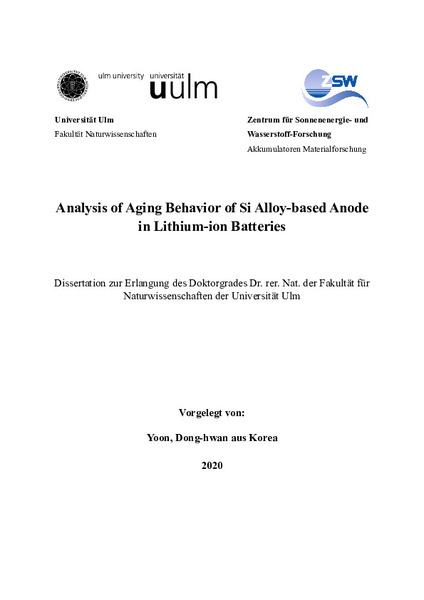 Silicon-based anodes such as silicon alloy are promising electrode materials for high energy density lithium-ion batteries due to high theoretical capacity of 3579 mAh/g. However, the implementation of such anodes with high Si content in practical cells remains elusive because of the large volumetric and structural changes that occur during Li-Si alloying/de-alloying (charging/discharging). As a result, the Si-based materials show the typical aging behavior such as loss of electrical contact and formation of a new surface without solid-electrolyte interphase (SEI), which then consumes Li to generate new SEI and eventually causes capacity fade. One approach to achieve a long cycle life is to incorporate electrolyte additives, which are responsible for the formation of an interphase on silicon-based anodes that mitigates continuous growth of SEI and possesses flexible nature. Flouroethylene carbonate (FEC) has been known as an effective additive, but recent studies has identified the aging behavior of the cells incorporating FEC, which is a continuous consumption of FEC during cycling, resulting in a sudden capacity drop. Therefore, monitoring and quantifying the consumption of FEC is of importance to estimate a cell failure. The first part of the thesis presents the development of a quantitative method to determine the FEC concentration in a cycled cell by attenuated total reflectance (ATR) FTIR. The band at 1835 cm-1 from a C=O stretching serves as an identifier, which is linearly proportional to the concentration of FEC. The analysis showed that the FEC content decreases linearly upon cycling and the complete FEC consumption coincides with a sudden drop of the electrode capacity. Another approach to slow down aging and to increase the cycling performance of Si-containing electrodes is to use more effective polymer binders that are able to maintain the mechanical stability of the anodes during repeating volume changes. Thus, the second part of the thesis focuses on how the cell aging depends on the choice of binders (i.e. LiPAA, PVdF, and PVA), which was investigated by in situ techniques: (i) dilatometry; (ii) optical microscopy. Analysis of electrode thickness changes monitored by dilatometer showed that the anodes comprised of LiPAA exhibits the greatest volume expansion but also demonstrates the highest cyclability and reversibility. This is tentatively attributed to the strength of the interaction between binder and silicon particles (via ion-dipole interactions) dominating the electrode properties, rather than the stiffness of binders. It is shown with in situ optical microscopy (IOM) that a direct, real-time visualization of electrode thickness changes as well as the changes of particles underwent during cycling were enabled. Ex situ SEM imaging revealed that the electrode porosity after delithiation increases compared to that after precedent lithiation, which might buffer volume expansion at the subsequent cycle. One key finding of this body of work is that larger volume expansions are not necessarily harmful to longer term cyclability, and that the cohesion strength of the electrode by binder is a critical descriptor which should be considered during future research.