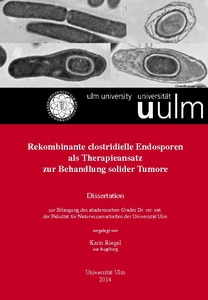 Obligate anaerobic bacterium Clostridium sporogenes have the ability to selectively colonize hypoxic areas of solid tumors. This feature can be exploited as a new approach for cancer therapy, in which a recombinant strain produces and secretes a liposome degrading enzyme directly in the tumor. In combination with the application of liposomes, the enzyme is supposed to degrade liposomal formulations of anti-cancer drugs. This leads to the release of the cytostatic agents in situ and thus an enhanced anti-tumor effect. Enzymes of choice for this approach were the liposomase of Clostridium novyi, the phospholipase C of Clostridium bifermentans and a previously unknown enzyme of a metagenomic library, which were investigated in terms of liposome degrading activity as well as hemolytic activity. Of these three alternatives, only phospholipase C proved to be suitable for liposome degradation. Expression of the phospholipase C in C. sporogenes was achieved via a constructed clostridial T7 system and phospholipase activity was detected in the culture supernatant. Also, colonization of an in vitro spheroid tumor model with C. sporogenes was investigated in this work. C. sporogenes spores were shown to germinate in spheroid tumors by detection of vegetative cells.