Investigation of electrode/electrolyte interactions and gas formation of Li4Ti5O12 and LiPF6/EC: DMC in lithium ion batteries 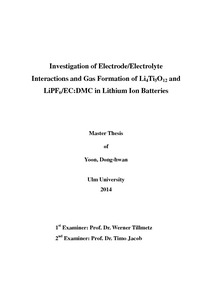 Lithium titanium oxide spinel (Li4Ti5O12, LTO) is a promising anode material in terms of a very small volume change during cycling, an excellent cycling stability and a relatively high operating voltage ca. 1.55 V vs. Li/Li+ providing better safety characteristics. However, recent studies show that cells constructed with LTO produce gas (mainly H2, CO2 and CO) during cycling and storage. This gas formation is related with interactions between the electrode (surface) and the electrolyte. The interactions between the Li4Ti5O12 electrode and the electrolyte have been investigated by in-situ Fourier transform infrared (FTIR) spectroscopy and cyclic voltammetry. Absorbance band changes on charge and discharge have been identified and interpreted by five processes which are related to concentration changes in the electrolyte. New compounds, which might have formed due to electrolyte decomposition, could not be identified. In-situ pressure measurements during cyclic voltammetry experiments have been carried out with LTO/Li half cells and Li4Ti5O12/LiFePO4 (LTO/LFP) full cells. In all cases the gas formation starts immediately after the start of the test, at potentials before the actual charging of LTO is started. The gassing rate immediately after charge is slightly higher than the rate before the corresponding charge process, whereas the rate slightly decreases after discharge compared to that before the discharge process. For the LTO/Li half cell a sudden pressure decrease was observed on charge and an increase on discharge, which can be explained by the dissolution and deposition of the lithium metal counter electrode, respectively.