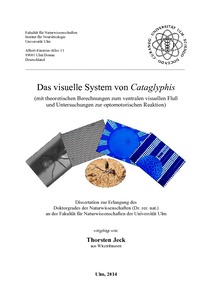 The global question of this thesis is in which regions of the ventral visual field Cataglyphis is able to measure distances by vision. Besides, the Introduction depicts the natural habitat, colony arrangement and navigation and orientation behaviour of the two species Cataglyphis bicolor and Cataglyphis fortis. Furthermore, the potential and actual sensory systems involved in navigation tasks are discussed. Bees are phylogenetically closely related to ants and rely nearly exclusively on their visual system in navigation tasks. Therefore, the visual navigation features of Cataglyphis are compared with those of bees. To determine which areas of the ventral visual field are suited for visual distance measurement, the second part of this thesis deals with theoretical calculations of the ventral visual flow fields (spatial wavelength of ground patterns and experienced angular velocities) occurring during locomotion. Thereby the potential oscillation of the head induced by locomotion is taken into account. This oscillation leads to changes in the eye-to-ground distance, which in turn leads to special non-linear perspective-induced switching effects in the perception of pattern size and angular velocities in the frontal azimuthal plane of the ventral visual field. Considering these switching effects which destabilize the animals’ environmental image, the calculations show that presumably only the lateral areas close to the horizon are suited for visual distance measurement. The third (experimental) part deals with the question whether the visual orientation and navigation behaviour of Cataglyphis can be examined under laboratory conditions. Initial experiments focussing on the optomotor response of Cataglyphis workers, queens and males were carried out to determine artificial visual flow fields that lead to a reaction.