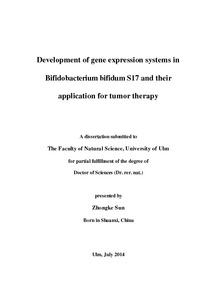 Based on their beneficial properties and their generally being recognized as safe status, bifidobacteria are used as probiotics in food and pharmaceutical industries. In the future, recombinant strains with enhanced and/or new beneficial properties may become an option for alternative or supplementary treatment of various diseases including inflammatory bowel disease or cancer. This thesis established an efficient system for production of secreted proteins with therapeutic potential using recombinant bifidobacteria and composed by following work: 1. Four putative promoter sequences were analyzed using a glucuronidase reporter system in B. bifidum S17. This revealed that the DNA sequences upstream of the gap gene yielded highest levels of GusA reporter activity amongst the promoters tested. 2. The transcription start site of the gap promoter was determined to be a thymidine residue 62 bp upstream of the translational start site. Using bioinformatics comparison, the -10, -35 and ribosome-binding site of Pgap were identified. The Pgap core regions are highly conserved in all five Bifidobacterium sp. analyzed indicating that Pgap of B. bifidum S17 is functional across these species. 3. Using the E. coli appA gene and the predicted signal peptide of a sialidase (BBIF_1734), a reporter vector for analysis of signal peptides in B. bifidum S17 was generated. This system was used to analyze the efficacy of other seven predicted signal peptides to mediate protein secretion. 4. The most efficient signal peptide were fused to a codon adapted gene encoding for a nitroreductase, and cloned under control of Pgap. The resulting vector was transformed into B. bifidum S17 and this recombinant strain exhibited high nitroreductase activity in culture supernatants. The engineered strain can efficiently convert the prodrug CB1954 to cytotoxic drug.