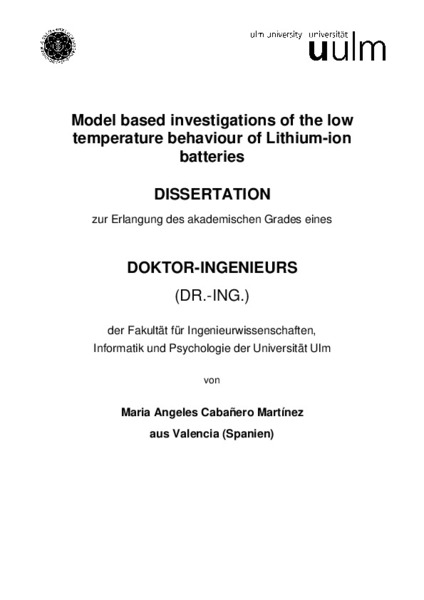 Due to their high energy density, Li-ion batteries represent nowadays the most promising electrochemical storage devices for portable electronics, electric vehicles and stationary energy storage application. However, some challenges need to be overcome, especially for automotive applications. These include: the increase of the energy and power densities, decrease the cost, fast charging, safety, aging and recycling of the components, among others. A particular problem regards the sudden degradation due to the many undesired reactions which take place during battery operation. Batteries are complex systems and the effects contributing to capacity fade are still not well understood. One of these undesired reactions is the deposition of metallic lithium on the anode surface during the charging process. This phenomenon, called lithium plating, is not only the main cause for battery degradation when charging at low temperatures, but it may lead to a short circuit, when lithium dendrites deposits in a needle-like form, piercing the battery separator. In large format cells, where temperature and current distributions are not uniform, the lithium deposition process starts locally and it is difficult to detect. A few techniques have been employed to detect and quantify lithium plating, but these are not spatially resolved, and there is still no method that directly detects the deposition of metallic lithium during battery operation. Electrochemical models allow the evaluation of the lithium ions concentration, temperature and potential distribution within the cell, parameters that can be used to identify the plating onset conditions. Experimental parameterization is needed as different parameter combinations lead to the same cell potential curve. Each cell has a specific geometry and the transport parameters depend on the chemistry of the component and on the geometry of the cell. Furthermore, tabulated values for such parameters are scattered and often do not provide information on the electrode geometry. In-operando characterization techniques like optical microscopy and micro-Raman spectroscopy are employed to detect the lithium plating onset in the micro-scale. Intercalation of the plated lithium on the graphite surface was observed during the resting periods after charge and during the constant voltage step. However, at C-Rates higher than C/2 and temperatures below zero degrees, fast capacity decay due to irreversible lithium plating was observed in most commercial cells except in one type. A non-isothermal electrochemical model is used to investigate the lithium plating onset conditions of the commercial Li-ion cell where no plating was found even at very adverse conditions (1C and -10 degrees or 4C and 0 degrees). This model is parameterized experimentally and validated against the individual potentials. Geometry and transport parameters are determined at different temperatures and states of charge. New approaches for a fast parameterization process are introduced and the results are in good agreement with the ones obtained by other techniques. The model can predict well the temperature, potential and current distribution within the cell during charging at high C-rates and low temperatures. This promising model can be used to design new fast charging strategies for Li-ion batteries at low temperature without a detrimental effect on the battery life.