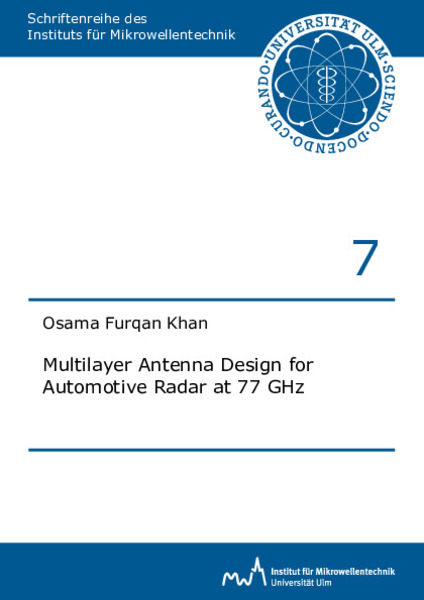 Radar sensors are an integral part of driver assistance systems. The performance of modern automotive radar sensors can be improved by incorporating multilayer wideband antennas in these systems. In this thesis, such wideband multilayer antenna array concepts for automotive radar sensors operating in the frequency range 76--81 GHz are investigated. The first two concepts investigated are based on a conventional multilayer PCB. A variable width grid array antenna is used for both designs, with the feed network being the difference between both concepts. For the first design, a two substrate layer PCB is used. The second design employs a three substrate layer PCB. A novel hybrid approach to design multilayer antennas is then introduced. Multilayer antennas are designed using single layer PCB and multilayer thin films attached to the PCB. The single layer PCB houses the complete feed network, whereas the radiating elements are realized on multilayer thin films. Two antenna concepts are presented as examples of this approach. The first is an aperture coupled stacked patch (ACSP) antenna array fed by a grounded coplanar waveguide (GCPW) feed network. A novel compact power divider is included in the feed network to reduce inter-element distance. The second concept is based on a novel antenna element, namely the stacked grid antenna (SGA). Feed networks with three different transmission line types are realized, namely the SIW, GCPW and MS, to create antenna arrays with the SGA to show the flexibility of antenna design. A comparison between the multilayer PCB approach and the hybrid thin film approach is then performed, using the investigated designs as the basis. The comparison shows that both approaches have their benefits. In terms of aperture efficiency, multilayer PCB antennas can achieve better results due to a completely buried feed network. However, it is shown that the hybrid thin film approach achieves similar wideband antenna performance as the conventional multilayer PCB approach, with added benefits of simple design, low cost manufacturing and increased robustness.