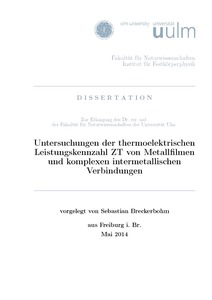 While many thermoelectric studies concentrate on materials with a large bandgap for high-temperature applications (T=400-800 °C) the present work provides the measurement of Rho, S and Lambda of metallic and semiconducting thin films with a smaller bandgap, whereas Rho and S are determined as a function of temperature in the range between 7 K and 300 K. The transport measurements are correlated to structural and morphological investigations of simultaneously prepared thin films. The thickness dependence of those transport properties is studied for Au films as a function of thickness (t = 10-80 nm). The difference between the mean free path of electrons and phonons caused a bulk-like behavior of the electric resistivity and the Seebeck coefficient for film thicknesses above 40 nm, whereas the thermal conductivity reached the bulk value for film thicknesses larger than 80 nm. The focus of the second part of the present work is set on the manipulation of the electronic structure near the Fermi energy of thin Fe1-xCoxGa3 film systems. By the variation of the cobalt concentration the transport behavior can be switched from semiconducting FeGa3 films to metallic (Fe0,75Co0,25)Ga3 and CoGa3 films. In the as-prepared state immediately after film deposition all films are amorphous. This is further understood by the transport measurements, which show typical amorphous features like a negative coefficient of resistivity. In addition a tendency of a sign change of Alpha is found like the empirical Mooij-rule describes for metallic glasses. The films crystallize after annealing at 100-300 °C under vacuum conditions. The electric resistivity then switches to metallic behavior for the CoGa 3 and (Fe 0,75 Co 0,25 )Ga 3 films, whereas the FeGa3 films indicate semiconducting features. The figure of merit at room temperature is enhanced significantly from a value of 0.65 · 10 to the minus third power in the amorphous state to 3.43 · 10 to the minus third power in the crystalline state.