Importance of SOD2 in neuronal homeostasis: study of a novel mouse model 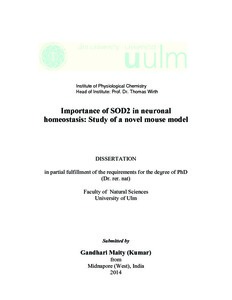 Redox imbalance is believed to contribute to the development and progression of several neurodegenerative disorders. Our aim was to develop an animal model that exhibits neuron-specific oxidative stress in the CNS to study the consequences and eventually get clues regarding the pathomechanisms of oxidative insults in neuronal homeostasis. We therefore generated a novel neuron-specific SOD2-deficient mouse by deleting exon 3 of the SOD2 gene using CamKIIalpha-promoter driven Cre expression. These neuron-specific SOD2 knockout (SOD2nko) mice though born at normal frequencies, died at the age of 4 weeks with critical growth retardation, severe energy failure, and several neurological phenotypes. Consistent with the important role in scavenging superoxide radicals, the SOD2nko mice showed significant accumulation of reactive oxygen species (ROS) with enhanced oxidative damage in the forebrain where SOD2 was inactivated. In addition, SOD2nko mice exhibited severe neuronal alterations such as neurofilamentopathy, reactive astrogliosis, neuronal cell cycle inhibition, and induction of apoptosis. JNK activation and stabilization of p53, as a result of ROS accumulation are most likely the inducers of neuronal apoptosis in SOD2nko mice. Remarkably, hypothalamic regulation of glucose metabolism was affected, which in turn induced necrotic brain lesions in SOD2nko mice. Taken together, the findings of present study suggest that deficiency of SOD2 in forebrain neurons results in induction of neuronal apoptosis, an impaired central regulation of glucose metabolism as well as energy homeostasis that leads to persistant hypoglycemia, hypoglycemia-related neurodegeneration and an early postnatal lethality of the mutant mice.Our investigations thus provide insights into the physiological importance of neuronal SOD2 in overall survival and energy homeostasis.