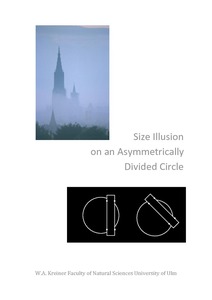 A variant of the Poggendorff illusion is investigated. A circular line is divided asymmetrically by a vertical bar such that two segments of different size are protruding on each side of the bar. From the apparent size of the segments one gets the impression they belonged to circles of different diameters. This effect is investigated by measuring the perceived size of each of the segments separately, with the occluding bar a) oriented vertically and b) inclined by alpha = 45 deg. It was found that, for vertical orientation, the perceived size of the small segment is, on the average, 91 % of its true diameter, but 96 % with the bar tilted. The larger segment (which was varied in size, serving as the independent parameter) was estimated nearly correctly. However, the apparent relative size (in % of the true size) of both segments decreases slightly with increasing diameter of the larger segment. This is interpreted as due to a size constancy effect. In another experiment, two pairs of dots were positioned opposite to each other right on the edges of the bar, half way between the merging points of the circular arcs. The bar was presented in nine different orientations alpha, ranging from vertical to horizontal. It was found that the perceived size y(alpha) of the large segment, as a function of its orientation, deviates only slightly from its true size while, the perceived size of the small segment appears to depend strongly on the tilt angle. For alpha = 0 degrees (vertical bar) and for alpha =90 deg, the segment appears to be smaller by about 4 %, compared to its true size. The maximum of the illusion was observed at tilt angles of 8 deg and 82 deg, where the small segment appears to be reduced in size by nearly 11 %. A nearly correct estimate occurred at alpha = 45 deg. Possible explanations of this illusion are discussed as well as its close relationship with the classic Poggendorff illusion.