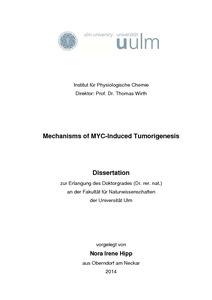 MYC proto-oncogenes are deregulated in up to 70 % of all human malignancies. Due to their pro-apoptotic function, additional genetic alterations are required to allow for MYC-driven tumorigenesis. In several tumor entities both MYC proteins and survivin, one of the most tumor-specific genes, have been described as unfavorable prognostic markers, but it is unknown whether they cooperate in carcinogenesis. Using Rat-1 fibroblasts as model system, the present study shows that survivin enhanced MYCN-driven anchorage-independent growth and release from contact-inhibition in vitro. Importantly, upon subcutaneous transplantation into mice, cells coexpressing MYCN and survivin generated tumors with shortest latency, increased anaplasia and highest proliferation rate. Increased tumorigenicity was associated with a metabolic switch to aerobic glycolysis (the Warburg effect) and HIF1alpha-linked vascular remodeling. These findings demonstrate that MYCN and survivin cooperate in malignant transformation of fibroblasts, which is relevant for the genesis of several cancers. The pro-survival activity of NF-kappaB signaling pathway plays a key role in controlling initiation and progression of various types of human cancer. Previous studies in our lab have shown that proliferation and survival of MYC-driven B cell lymphomas is incompatible with elevated NF-kappaB activity. To test whether inactivation of NF-kappaB signaling is a general feature of MYC-driven malignancies we established a mouse model of MYC-induced hepatocellular carcinoma (HCC). With a high penetrance and short latency mice developed HCC, which were considerably similar to the human disease. It was not possible to activate NF-kappaB in the tumors - neither via stimulation with TNF-alpha nor via expression of a constitutively active IKK2. These findings imply that MYC-driven cancers actively down-modulate the NF-kappaB pathway and that its forced reactivation might be a treatment option for this subset of malignancies.