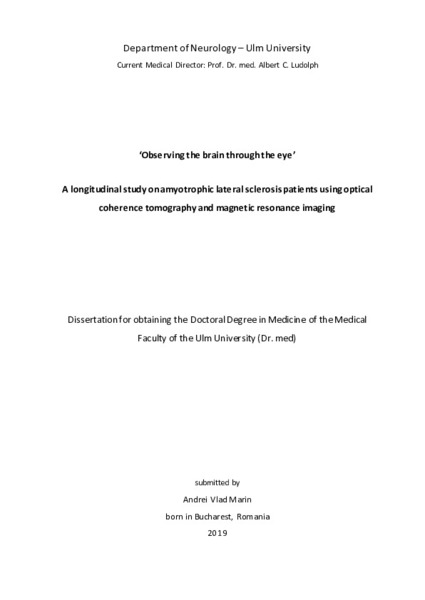 For the present study, 34 patients (52.9% male and 47.1% female) suffering from ALS (amyotrophic lateral sclerosis) and 21 healthy controls (52.4% male and 47.6% female) were recruited between August 2015 and November 2016 to undergo OCT (optical coherence tomography) and DTI (diffusion tensor imaging) investigation in two visits, separated by 6 months. For the second visit, only 18 of the 34 patients (44.4% male and 55.6% female) and 18 of the 21 healthy controls (55.6% male and 44.4% female) were available. 23 of the 34 patients (60.9% male and 39.1% female) underwent DTI investigation around the same date as the OCT investigation for the first visit. At the second examination, only 9 out of the 23 patients (66.6% male and 33.4% female) were available. Optical coherence tomography images were obtained with the Heidelberg Spectralis HD-OCT device (Heidelberg Engineering GmbH, Heidelberg, Germany, software version 6.0.11.0) and DTI images were obtained on a 1.5 Tesla scanner with the Siemens Magnetom Symphony (Siemens Medical, Erlangen, Germany). The objectives of the study were first, to explore the theory, that retinal changes occur in ALS patients compared to controls, second, to observe if retinal thinning or thickening occurs at a faster rate in patients compared to controls, and third, to check for any association between white matter integrity and retinal thickness. A patient history was taken for every subject and those with any history of ocular disease were excluded from the study before acquiring images. A few important examples are glaucoma, increased intra-ocular pressure, PD (Parkinson’s Disease), multiple sclerosis, diabetes type 1 and 2, invasive surgery of the eye in the last 2 years and retinal detachment. The same exclusion criteria were applied for both the first and the second visit. After using a combined automatic and manual segmentation algorithm to analyze specific individual layers separately, statistical analysis using SPSS Statistics version 24.0.0.0 (IBM Corporation, Armonk, NY, USA) and SAS version 9.4 (SAS Institute, Chicago, Illinois, USA) was performed. Based on the results of this study, there seems to be no difference in retinal thickness between patients suffering from ALS and healthy controls in none of the specific retinal layers, the best achieved p-value being p = 0.220 for the INL (inner nuclear layer). Nevertheless, a trend of retinal thinning can be shown, where group comparison results show the same pattern at baseline and at follow up. Longitudinally speaking, no thinning of the retina can be observed across a period of 6 months, not even when compared to controls. In both the patient and the control group, comparison results point to no significant change and seem to be similarly random distributed over all individual retinal layers, the best achieved p-value being 0.202 for the RNFL (retinal fiber layer). These results suggest that retinal thinning, if any is existent, does not occur at a faster rate in the eye of an ALS patient than in the eye of a healthy individual. Moreover, retinal thickening should not be excluded. Additionally, no relationship between disease duration, visual acuity or contrast sensitivity and retinal thickness could be demonstrated. The only significant correlation that was observed was between retinal thickness in the INL and disease severity at follow up (Pearson’s r = -0.59, p = 0.01). In addition, no concrete relationship between white matter integrity and retinal thickness could be provided by this study, as the CST (corticospinal tract) did not correlate significantly with retinal thickness in any individual retinal layer. Further studies are needed to evaluate retinal thickness by OCT as well as to investigate possible links between retinal thickness and neurodegeneration in motor-neurons. A standardized and uniform examination protocol containing comprehensive ophthalmological examinations and bigger sample sizes is advisable for future studies, as well as for the clinical application of optical coherence tomography. This will significantly facilitate the comparability of the respective results and possibly provide deeper insight into the pathophysiology of the amyotrophic lateral sclerosis