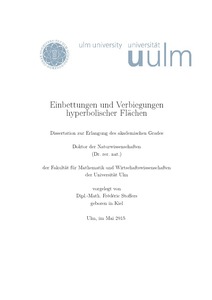 In this thesis we solve embedding problems of two dimensional hyperbolic Riemannian metrics with three dimensional Euclidean space as target space under two different geometrical initial conditions. By using the Heinz-Lewy-method of introducing asymptotic parameters into the second fundamental form of an a priori given surface the embedding problem is reduced to solving the Darboux system for the parameter transform which is of second order and of semilinear hyperbolic (due to the hyperbolicity of the metric) type. In the case of a metric with three times continuously differentiable coefficient functions with third derivatives being Hölder-continuous that system is solved by an iteration process and a compactness argument using a priori estimates for solutions of the corresponding linear system. In the case of a metric with four times continuously differentiable coefficient functions the system can be solved more easily by means of the contraction mapping principle yielding not only existence but also uniqueness of the solution. In this situation we also prove several bending results for hyperbolic surfaces by introducing appropriately a real deformation parameter in the Darboux system and using uniqueness of the solution which allows to reconstruct the initial surfaces. Finally we deal with infinitesimal bendings leading to linear systems of partial differential equations of first order and prove a rigidity result for hyperbolic surfaces under the geometric restriction of keeping a nonasymptotic curve in the surface fixed.