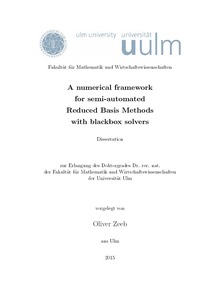 The Reduced Basis Method (RBM) has become a widespread model reduction technique for parametrized partial differential equations in the past few years. Yet, it has not found its way into automated commercial or open-source simulation software so far. One problem that has to be addressed is the Greedy algorithm which classically is based on a parameter grid. The curse of dimensionality let these grids grow exponentially with the number of parameters. For higher dimensions this fact prohibits the usage of sufficiently large training sets in the offine phase, so other techniques have to be used. We investigate an optimization based Greedy algorithm and present different strategies for the choice of the initial values. Further, for the application of the RBM deeper knowledge about the underlying problem, such as its affine decomposition, is usually provided. This is not always the case, especially if commercial software packages are used for the simulation. They are considered as blackboxes where the internal structures are not accessible. With the Operator Extraction Method we present a method that is capable to determine an affine decomposition in this context which in turn can be used for the Reduced Basis Method. It is based on linear independence and interpolation or regression methods. The introduced method is examined with several models to show its applicability. The combination of these two approaches is a step into the direction of automated RBMs which can be included into user friendly software. In the context of this thesis the software package RB-COM was developed and is presented here as well. It is based on RBmatlab and provides a possibility to the automated treatment of linear stationary models which were generated with COMSOL Multiphysics 4.2a with the Reduced Basis Method. No deeper knowledge, neither about COMSOL, nor RBmatlab, nor the underlying model is required.