Models of curves and valuations 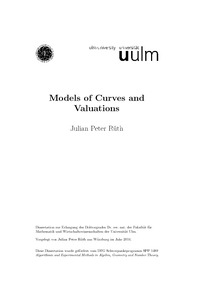 The Semistable Reduction Theorem by Deligne and Mumford states that any absolutely irreducible smooth projective curve over a field with a discrete valuation has a semistable model, at least if one admits a finite separable extension of the base field. The original proof does not provide a construction which can in practice be exploited to compute semistable models of curves. A recent proof of the Semistable Reduction Theorem by Arzdorf and Wewers uses techniques which are more accessible to algorithmic constructions. The present work makes several aspects of their approach explicit and realizes them in a computer algebra system. We represent models as finite sets of discrete valuations which correspond to the irreducible components of the special fiber. A theory by Mac Lane provides a compact representation of such valuations which is well suited for algorithmic considerations. In particular, it allows us to efficiently compute the normalization of a model of X in Y, i.e., the valuations which correspond to the normalization. From this we can also immediately deduce whether a model has reduced special fiber or not, a necessary condition for a model to be semistable. If the special fiber of a model is not reduced, then a theorem of Epp guarantees that there is a finite extension of the base field which makes it reduced. As Epp"s method is not fully constructive, we discuss alternatives to his approach. Using the theory of Mac Lane valuations, we provide a new algorithm to construct such an extension of the base field when working in mixed characteristic (0,p). Our algorithm is provably correct if p does only divide the degree of the cover of Y over X once. Assuming that the special fiber is reduced, we provide a new algorithm to compute equations for certain affine patches of the special fiber. Finally, we illustrate all the techniques developed in this work by computing semistable models in several examples.