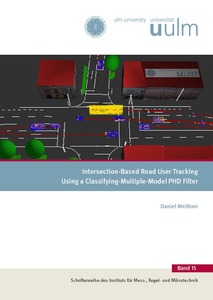 Due to an increasing number of traffic accident fatalities at intersections, the prevention of traffic accidents at intersection attracts more and more attention in public as well as in research. Thus, a busy public intersection in Aschaffenburg, Germany was equipped with an intersection perception system, which contains multiple laserscanners and video cameras as well as data processing units. The focus of this thesis lays on the tracking of road users at traffic intersections. Thus, a tracking approach is required which is able to handle multiple objects detected by multiple classifying sensors with different field of views. Due to the topdown modeling of the multi-object tracking problem and the availability of efficient implementations, a Gaussian mixture probability hypothesis density (GM-PHD) filter is used. Based on this the classifying multiple-model probability hypothesis density (CMMPHD) filter is developed which facilitates to track road users of different type with its appropriate motion model and classify them. The classification is able to distinguish pedestrians, bikes, cars, and trucks. Therefore, features of the measurements and of the tracks are used. To model the object class of each track a basic belief assignment (BBA) of the Dempster-Shafer theory of evidence (DST) is exploited. Based on the estimated objects’ classes the objects’ motion model transition probabilities of the multiple model filter are adapted. To reliably recognise the road users in their varying appearances, laserscanners and video cameras are used. The fusion of the sensor measurements with the multi-sensor CMMPHD filter is realized by the introduction of the sensor individual modeling of the recognition abilities and the detection probability. In the end, the developed methods to recognize and track road users at traffic intersections are evaluated with real-world sensor and reference data.