Modeling the propagation, scanning and optimization of focused light beams in scattering media 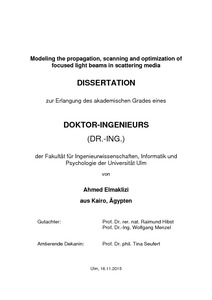 In our pursue for better resolution in imaging inside scattering media in all sort of scientific and industrial fields, we hit a barrier. Namely, the destruction of the focus of the illuminating beam. This limitation can be circumvented by better understanding the interaction between focused illumination systems and the scattering media. In this work each of the incident light beams was decomposed into a summation of plane waves using the angular spectrum of plane waves (ASPW) description. This allows us to model focused beams with an arbitrary numerical aperture (NA) without the limitations found in the paraxial approximation. Said beams are simulated using a finite-difference time-domain (FDTD) tool that was developed during the work and further enhanced to simulate the scanning of focused beams in a more efficient way compared to other FDTD solvers. Using the developed tools, it was possible to show that using small NA beams for imaging deep inside scattering media proved more advantageous than high NA beams. Also due to the usage of the ASPW formalism, it was possible to model and verify the mechanism of wave-front shaping. Such a tool that uses the exact solution of Maxwell"s equations can be used in the future to further our development of applications such as phase optimization, photo-acoustics and many more techniques that are expected to keep pushing the boundaries of deep imaging inside and through turbid media.