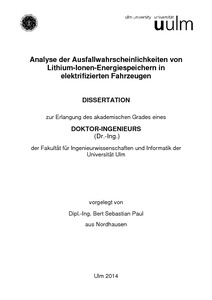 The allocation and storage of electric energy is one of the important issues regarding electrifying vehicles. The aim of the development of an energy storage system is to optimize the system with respect to performance, lifetime and costs. An important tool during this development is the life time simulation. In this dissertation, a new simulative approach that can determine ageing inhomogeneities in lithium-ion battery systems is outlined. The proposed method is based on a simulation model of an entire battery system consisting of a various number of cells and the Monte Carlo Method. This method considers cell-to-cell spread due to production tolerances, as well as different loading of cells caused by temperature and SoC (State of Charge) inhomogeneities within the battery system. Each cell in the battery system model is represented by its own thermal, electrical and ageing sub-model, having an initial capacity, initial internal resistance, ageing rate and thermal connection to the cooling system. In the experimental part of this work, various battery systems consisting of 96 lithium-ion cells based on the LiFePO4-technology were tested to investigate the capacity fade and impedance rise during calendar and cycle life tests. The results show that discrepancies in cells ageing within the battery system are a consequence of cell-to-cell spread and different loading of the cells, caused by temperature and SoC inhomogeneities within the battery system. Furthermore, this work evinced that the consideration of different ageing rates of cells within a battery system is necessary for a high accuracy in life prediction. In addition, a new method is outlined that can synthesize customer driving profiles, in order to investigate the customer influence on battery ageing in an electrified vehicle. This method is exemplified on a hybrid electric vehicle (BMW ActiveHybrid 5).