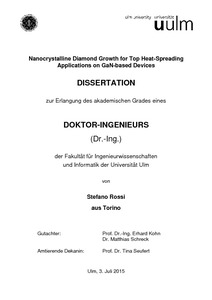 In this work, several issues related to the direct growth of NCD films onto III-Nitrides for the thermal management of GaN-based HEMTs are addressed and handled. The first and most fundamental issue consists in fabricating GaN HEMTs able to withstand a diamond deposition process, which exposes for several hours the device to a plasma of H-radicals and to high temperatures above 700 °C. By using NCD overgrowth experiments performed on InAlN/GaN HEMTs, high temperature stable metallization systems and passivation dielectrics were developed, which led to fully-fabricated InAlN/GaN HEMTs successfully coated with 0.5, 1.0 and 2.8 µm NCD films, deposited at a temperature of 750 °C. Not only such devices largely preserved their DC and RF electrical characteristics after the diamond deposition process, but the maximum drain current density of about 1.3 A/mm and cut-off frequency f_t of 16.8 GHz obtained on the devices with 0.5 µm gate length and 1 µm NCD cap are the highest ever achieved for diamond-coated HEMTs. This work investigates also the correlation between growth parameters and structural and thermal properties for submicron-thick columnar-NCD films to find out whether such films may reach high thermal conductivity figures, and how is the thermal conductivity influenced by their anisotropic microstructure. The results of the structural analysis by means of SEM, AFM and HR-TEM and of the thermal characterization by SThM and µ-Raman thermography show that such NCD films may indeed reach high k values, but are very heterogeneous, with a clear dependence of the thermal conductivity k on the film´s in-plane grain size and thickness. In its essence, this thesis develops all the fundamental technological blocks necessary for the fabrication of diamond-coated GaN-based HEMTs, besides laying the basis for future optimization work which could allow to improve such a promising concept, and thus eventually solve the self-heating issue in high power GaN-based devices.