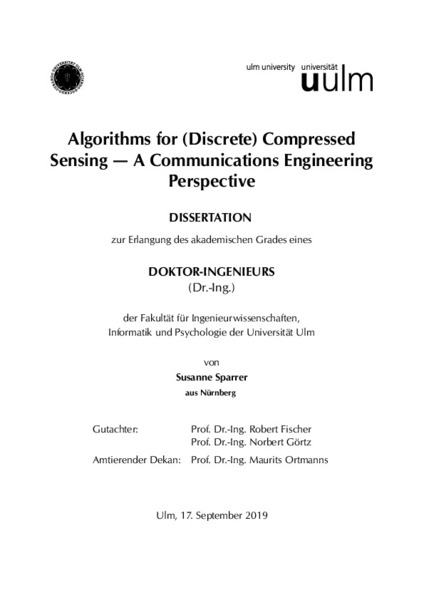 In the multiple-input/multiple-output scenario which is an important field of research in communications engineering, the data transmission from a couple of transmit antennas to a number of receive antennas is investigated, where usually the number of receivers is not smaller than the number of transmitters. In some applications, however, only a small number of the transmitters is active, allowing for a reliable transmission even if the number of transmitters exceeds the number of receivers. In order to determine which transmitters where active in a certain time slot and which data has been transmitted by them, a sparse vector has to be reconstructed from an underdetermined system of linear equations. This problem is denoted as compressed sensing, where the signal to be estimated is usually real-valued (or in same cases complex-valued, which is also the standard multiple-input/multiple-output setup). In many applications such as digital data transmission, however, the signal to be recovered is discrete-valued. Moreover, in every real world scenario the measurements are corrupted by additive noise which complicates the reconstruction of the original signal. In this thesis, the estimation of discrete-valued sparse signals from underdetermined linear systems in the presence of additive noise, the so-called discrete compressed sensing, is investigated. To this end, as discrete compressed sensing combines two main areas of communications engineering, namely, the joint estimation of multiple transmitters and the processing of discrete-valued data, knowledge and techniques known from communications engineering are applied, complementing the mainly mathematical perspective of the research on standard compressed sensing. In the first part (Chapter 3), the estimation principles of interest are discussed from a theoretical point of view. To this end, the different constraints which are to be taken into account are considered, and strategies for the estimation of the signal with respect to the channel model at hand on the one side, and with respect to the sparsity constraint and the discrete nature of the signal on the other side, are discussed. Moreover, the unbiasing of linear as well as nonlinear estimators is analyzed. In the second part (Chapters 4 and 5) of this thesis, based on standard algorithms for compressed sensing we develop powerful well-performing algorithms, which take into account the channel model including the additive noise, as well as the knowledge on the discrete setup and the sparsity. Therefore, the estimation principles utilized in the algorithms given in the literature are reviewed and replaced by superior approaches which were presented in the first part. Adaptations are discussed for successive and for iterative algorithms. The superiority of the algorithms developed in this thesis is demonstrated via numerical simulations. Furthermore, the resulting algorithms are analyzed from a communications engineering point of view, and compared to turbo-based estimation and message passing, which are well-known in channel coding. The in-depth study of the similarities and differences and the underlying approaches and approximations leads to an extensive understanding of the algorithms. The advantages and disadvantages of (approximate) message passing and turbo-based estimation are elucidated, and the equivalence of unbiasing and the calculation of extrinsic values is shown. Note that, although the focus of this thesis is on discrete compressed sensing, the proposed algorithms can be applied for every desired setup in which the a-priori probability density function of the sparse signal is known.