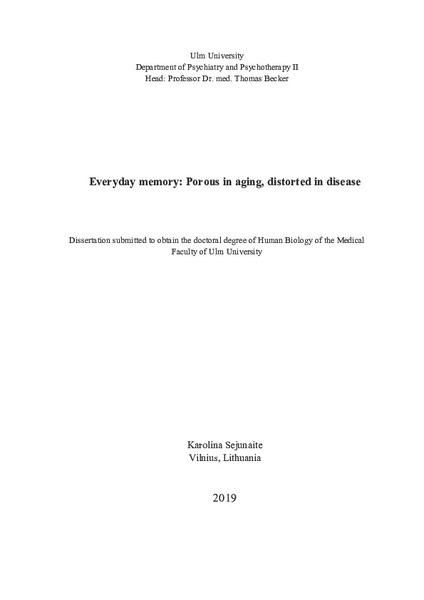 Memory errors are most often associated with omission of memory content; however, memory is no less susceptible to distortions and false memories. The current series of publications looks into the frequency of false alarms using ecologically valid stimuli in healthy younger (YA; n = 24, age (M ± SD) 26.58 ± 3.57) and older adults (OA; n = 23, age 69.74 ± 6.46) as well as patients with Alzheimer’s disease (AD; n = 20, age 72.20 ± 5.87) and older patients with depressive disorder (DD; n = 24, age 69.33 ± 5.75). All participants were shown 12 short video clips (six news clips and six commercial clips), which were followed by a recognition task of 12 items after each video. Number of hits and false alarms was calculated for each group. In the number of hits YA outperformed OA, who in turn outperformed DD and AD groups. Similarly, OA had significantly less false alarms than DD and AD; however, there was no significant difference in the number of false alarms between OA and YA. This later result was explained as a facilitation of correct rejection through complex and context rich recognition statements that are characteristic of ecologically valid tasks. It was also demonstrated that measures of executive function play a role in the formation of false memory content. The number of false alarms, but not the number of hits, could discriminate between OA and DD using ROC analysis. Furthermore, the number of false alarms, but not hits, correlated significantly with Aß42 levels in the CSF. Overall, it was demonstrated that ecologically valid tasks produce different results in recognition memory for older adults than was reported by studies using laboratory tasks. False alarms in daily memory are also a sensitive surrogate of pathological memory deficits.