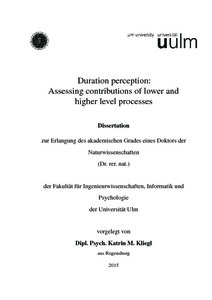 Although time perception in the milliseconds to seconds range is crucial for human perception and performance, it is known that time perception is prone to distortions. In current models of duration perception, effects of arousal and attention are stressed. In the present work, the contributions of lower level sensory and higher level cognitive processes are assessed, and methods are developed helping to disentangle these influences. In a first series of experiments, effects of the retinal stimulus position on duration perception were examined. Up to now, spatial effects have often been ascribed to attentional influences. In five psychophysical experiments, threshold measurements showed that the perceived duration of a stimulus decreases the more it is presented in the periphery. A second experimental series analyses effects of higher level cognitive processes on duration perception. In addition to replicating results that photographs of angry persons are overestimated in comparison to photographs showing neutral facial expressions, our results indicate that also face orientation and congruence between observers and models sex affect the perceived duration of stimuli. In a subsequent experimental series, we aimed at validating the observed overestimation of emotional stimuli using a newly developed method based on evaluative conditioning. The results confirm that the overestimation of emotional stimuli is independent of respective stimulus sensory stimulus characteristics. In conclusion, our results indicate that lower sensory processes modulate duration perception. Also, higher level processing, of for example, stimulus valence, affects duration perception. Both effects should be included in current models of time perception.