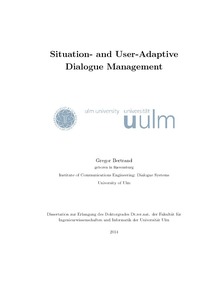 In the sea of human machine interaction a growing trend to personalize the interaction experience has been surfacing over the last decades. Human machine interfaces have more and more become companion systems which on the one hand collect data about the user either explicitly or implicitly and on the other hand adapt their interface and their behaviour to the context of the user. This trend has also found its way into the world of dialogue systems.This thesis addresses different aspects this trend brings about for the central part of any dialogue system, the dialogue manager. However, it focuses on the reaction of the dialogue manager to changing context information and investigates the technical side, as well as the architectural and interface side. As the detection of user context information has been and still is extensively investigated, it leaves out the part of gathering contextual information and assumes them as given. Firstly, context information which may be available is discussed presenting the aspects of gathering, processing and reacting to it. Secondly, the special topic of user emotion as context information is explored, especially focusing on the aspect of reacting to it. Then, an approach for integrating adaptivity into dialogue management in the areas of model, control, and design is presented. Finally, this approach is evaluated in a proof-of-concept manner for multimodal adaptivity and adaptivity of the dialogue itself as well as in an user study for several examples of dialogue adaptivity.