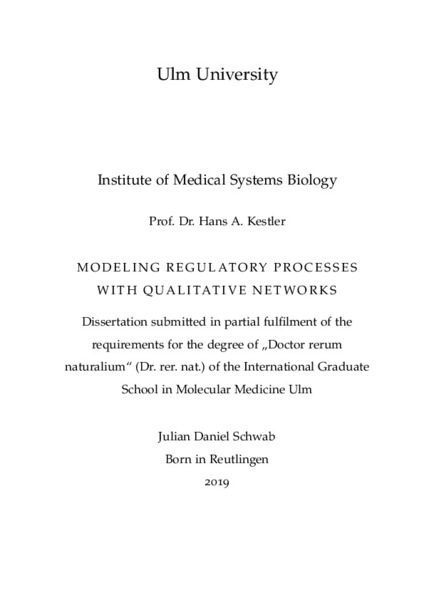 In systems biology, dynamic computer models are used to simulate the changing behavior of a system over time. Boolean networks are one popular class of dynamic models for regulatory processes. These models are based on propositional logic. They are used as tools to predict the qualitative behavior of a system over time. Stable states in the dynamics of Boolean networks are called attractors. Attractors are of particular interest for researchers as they represent biological phenotypes. Simulation of Boolean networks under perturbed conditions can help to identify drugable targets in a system. This work comprises different methods for model- ing and simulation of Boolean networks under normal and perturbed conditions. An algorithm to automatically detect meaningful perturbations and perturbation combinations which result in a user-specified change of the underlying network’s dynamics was developed. This algorithm aims to reduce the simulation effort when searching for specific effects on the system’s behavior. These methods are integrated into a framework for Boolean network modeling, called ViSiBooL. This framework was used to create and simulate a literature-based model of the Wnt/IGF crosstalk in hematopoietic stem-cells. The automated screening algorithm was successfully applied for target identification in a model of the senescence-associated regulatory phenotype after DNA damage. Boolean networks can be reconstructed from time-series data. The new reconstruc- tion pipeline in this work reduces computation time and increases the sensitivity of the predicted regulations compared to the compared base algorithm. Robustness is an essential property of biological systems, which makes it sustain- able against various kinds of stress. In this work, the changing robustness of a biological system during the process of aging was analyzed. Exhaustive attractor search in Boolean networks is an NP-hard problem which limits the manageable size of Boolean networks. An implementation of Boolean networks and attractor search on programmable hardware chips, called FPGAs, accelerates the attractor search by orders of magnitude. The simulation on these specialized hardware chips enables a more detailed analysis of larger networks than with software-based approaches.