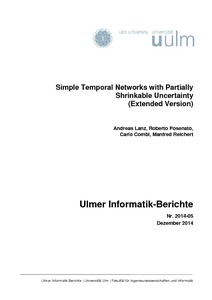 The Simple Temporal Network with Uncertainty (STNU) model focuses on the representation and evaluation of temporal constraints on time-point variables (timepoints), of which some (i.e. contingent timepoints) cannot be assigned (i.e. executed by the system), but only be observed. Moreover, a temporal constraint is expressed as an admissible range of delays between two timepoints. Regarding the STNU model, it is interesting to determine whether it is possible to execute all the timepoints under the control of the system, while still satisfying all given constraints, no matter when the contingent timepoints happen within the given time ranges (controllability check). Existing approaches assume that the original contingent time range cannot be modified during execution. In real world, however, the allowed time range may change within certain boundaries, but cannot be completely shrunk. To represent such possibility more properly, we propose Simple Temporal Network with Partially Shrinkable Uncertainty (STNPSU) as an extension of STNU. In particular, STNPSUs allow representing a contingent range in a way that can be shrunk during run time as long as shrinking does not go beyond a given threshold. We further show that STNPSUs allow representing STNUs as a special case, while maintaining the same efficiency for both controllability checks and execution.