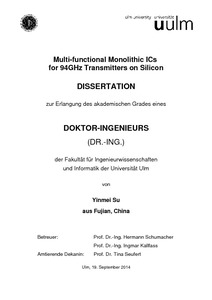 The atmospheric transmission window at 94 GHz is an established allocation for radar sensors. This wavelength can penetrate fog, clouds, or textile materials and offer good spatial resolution. Applications are indicated in areas such as meteorological and avionic safety and civilian security. It has attracted much investigation on low-cost high-performance frontends at 94 GHz. A promising way to reduce the design cost is to use Silicon-based (Si-based) multifunctional ICs. This has been achieved at 60 GHz and 77 GHz, while work at 94 GHz is mostly on single-function ICs and exclusively on the receive channel. In contrast, this work concentrates on the transmission frontend. The challenges of transmitter ICs on Silicon substrate result from several aspects such as the low breakdown voltages of Si-based transistor technologies with high transit frequencies. In this work, a phase-locked loop (PLL), an upconverter with a quasi-differential power amplifier (PA), an image-reject upconverter and a simple I/Q upconverter (with a quasi-differential PA) at 94 GHz were designed in SG25H1, a Si/SiGe BiCMOS technology from IHP GmbH. Investigations were done on the ways to achieve a stable signal source, quadrature generation, image rejection, high output power and integration on Silicon at 94 GHz. The PLL was designed to implement the local signal source, a capacitively loaded quadrature hybrid coupler was used to generate quadrature signals, bandpass filters on a dielectric substrate RT/duroid 5880 were designed to reject the image-band signal and the PA including the power combining technique was investigated to increase the output power of the system.