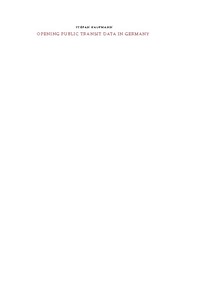 Open data has been recognized as a valuable resource, and public institutions have taken to publishing their data under open licenses, also in Germany. However, German public transit agencies are still reluctant to publish their schedules as open data. Also, two widely used data exchange formats used in German transit planning are proprietary, with no documentation publicly available. Through this work, one of the proprietary formats was reverse-engineered, and a transformation process into the open GTFS schedule format was developed. This process allowed a partnering transit operator to publish their schedule as open data. Also, through a survey taken with German transit authorities and operators, the prevalence of transit data exchange formats and reservations concerning open transit data were evaluated. The survey brought a series of issues to light which serve as obstacles for opening up transit data. Addressing the issues found through this work, and partnering with open-minded transit authorities to further develop transit data publishing processes can serve as a foundation for wider adoption of publishing open transit data in Germany.

Except where otherwise noted, this item's license is described as CC BY 3.0 Unported