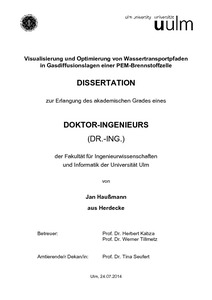 The efficiency of polymer electrolyte membrane fuel cells (PEMFC) operated in the low temperature range is still affected by water blockage in the porous layers. Emerging water at the catalyst layer is transported through the micro porous layer (MPL) and the gas diffusion layer (GDL) to be discharged in the channel. The porous layers fill up with water, so that the gas transport to the catalyst layer and hence the performance of the fuel cell are reduced. In this work synchrotron radiography and tomography are applied to analyze the water transport and the water distribution in the porous layers. With synchrotron tomography of the GDL and MPL material and with the water transport analysis during fuel cell operation, cracks in the MPL are identified as origin of water transport pathways. However, a low crack size and crack density result only in a minor enhancement of the water transport. Thus, artificial perforations are added to the porous layers by mechanical or laser treatment to enhance this water transport effect. The radiographic analysis reveals for the laser perforated GDL and MPL an improved water transport which is affirmed by a higher performance at the fuel cell test. To find the optimum in perforation size the diameter is varied between 30 mym and 400 mym. By electron microscopy analysis it is revealed that a lower laser power leads to smaller perforation sizes and a hydrophilic surrounding, whereas a higher power leads to larger perforations but causes the removal of the MPL in the surrounding. However, with synchrotron radiography a higher water transport is measured, if the perforation diameter is increased. Nevertheless an optimum in performance is achieved for a diameter of 60 mym which is caused by the water channeling effect of the hydrophilic surrounding. Under these conditions a maximum gain in performance of 23 % is achieved.