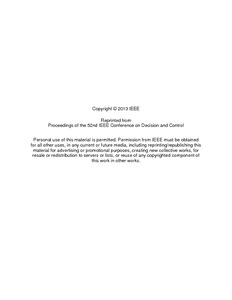 This paper describes a decomposition approach for the solution of constrained optimal control problems (OCPs) that is implementable in a parallel manner. A transformation method is applied to the constrained OCP by means of saturation functions resulting in a new extended problem formulation with additional subdynamics and equality constraints. The structure of the reformulated OCP is then exploited to derive a decomposition method in order to split the entire OCP into smaller subproblems which can be solved independently. Moreover, an algorithm is presented to solve the decomposed problem which is based on a hierarchical optimization scheme. An example system is used to demonstrate the performance of the presented approach.

Proceedings of the 52nd IEEE Conference on Decision and Control
http://ieeexplore.ieee.org/xpl/articleDetails.jsp?arnumber=6760801