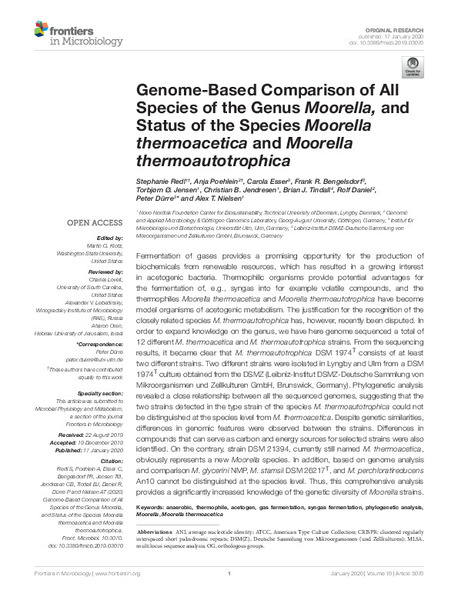 Fermentation of gases provides a promising opportunity for the production of biochemicals from renewable resources, which has resulted in a growing interest in acetogenic bacteria. Thermophilic organisms provide potential advantages for the fermentation of, e.g., syngas into for example volatile compounds, and the thermophiles Moorella thermoacetica and Moorella thermoautotrophica have become model organisms of acetogenic metabolism. The justification for the recognition of the closely related species M. thermoautotrophica has, however, recently been disputed. In order to expand knowledge on the genus, we have here genome sequenced a total of 12 different M. thermoacetica and M. thermoautotrophica strains. From the sequencing results, it became clear that M. thermoautotrophica DSM 1974T consists of at least two different strains. Two different strains were isolated in Lyngby and Ulm from a DSM 1974T culture obtained from the DSMZ (Leibniz-Institut DSMZ-Deutsche Sammlung von Mikroorganismen und Zellkulturen GmbH, Brunswick, Germany). Phylogenetic analysis revealed a close relationship between all the sequenced genomes, suggesting that the two strains detected in the type strain of the species M. thermoautotrophica could not be distinguished at the species level from M. thermoacetica. Despite genetic similarities, differences in genomic features were observed between the strains. Differences in compounds that can serve as carbon and energy sources for selected strains were also identified. On the contrary, strain DSM 21394, currently still named M. thermoacetica, obviously represents a new Moorella species. In addition, based on genome analysis and comparison M. glycerini NMP, M. stamsii DSM 26217T, and M. perchloratireducens An10 cannot be distinguished at the species level. Thus, this comprehensive analysis provides a significantly increased knowledge of the genetic diversity of Moorella strains.